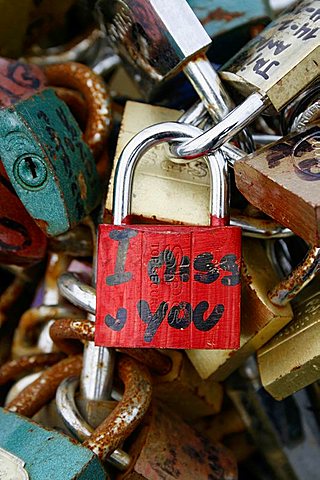 The tradition of locking a padlock inscribed with two lovers’ names to a fence, bridge or gate, and throwing away the key to symbolise their eternal love, seems to have appeared in the 2000s. The phenomenon now occurs all over the world, from China to Finland, Russia to Italy.

Love locks on the Hohenzollern Bridge, which have been locked to the fence by lovers since the summer of 2008, Cologne, Germany (Image Broker/Robert Harding) Love locks on the Milvio Bridge in Rome can be attributed Federico Moccia’s bestseller Ho Voglia di Te (I Want You). Javier and Nuria seem to be making sure (agefotostock/Robert Harding) Padlocks on a bridge at the Alster, Hamburg, Germany (Image Broker/Robert Harding)