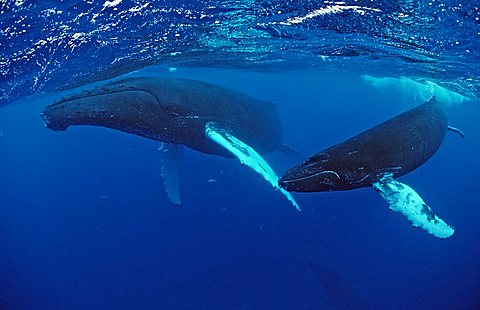 Good news: the hundred year war is over for whales. For the last hundred years many of the great whales have been hunted in the Southern Oceans during their annual migration, but they should be left in peace next season in accordance with a ruling by the International Court of Justice.

EVIDENCE OF WHALING dates back to 6,000 BC in Japan and South Korea but small scale ‘aboriginal’ whaling has also been recorded since then all around the world. A surge in whaling activity came in the 9th Century in Scandinavia and the Basque regions, followed by a larger, more commercial industry driven by the British. Between the 15th and 18th centuries they pioneered first the Atlantic Arctic whaling and then tackled the vast Southern Oceans from a base built in the Falkland Islands.

Explosive harpoons and factory whaling ships were developed to allow the industry to tackle larger whales, including 120 ton blue whales, in more remote areas such as the rich Southern Oceans. By the mid 19th century most of the great whales were reduced to 3% to 10% of their pre-whaling era numbers: from three quarters of a million BLUE WHALES in this area only a few thousand remain.

AN INTERNATIONAL WHALING COMMISSION (IWC) was set up to manage whale stocks but hunting quotas were based on trends. Whalers often killed young whales and drew in their carers (mothers and aunties in whale communities) but did not record this. Even using modern technology (satellite tags on animals and underwater acoustic detectors) there are no accurate figures in this region for today’s populations or how healthy their gene flow is.

We do know that the whalers recorded blue whales up to 120 feet long and 120 tones but since the end of the whaling era such huge animals (the largest on earth), have not been recorded, and possibly their genes have been lost with them. By the 1960s the British fleets had ceased whaling but some pirate vessels and the fleets from Japan and the Soviet Union were still focussed on the Southern Oceans. The IWC issued a commercial ban in 1986. Since this moratorium only one nation has continued to whale in the southern ocean commercially – Japan – under the guise of ‘scientific whaling’.

JAPANESE WHALE MEAT WAS SMUGGLED INTO RESTAURANTS, which fuelled a whaling industry in Norway and Iceland who could not sell their meat locally, and their claims of ‘scientific whaling’ failed to be verified. A whale sanctuary set up in the Indian and Southern Oceans, and nearly 30 years of campaigning from NGOs in dozens of countries did not stop the Japanese fleets. Finally the Australian Government recently took Japan to court through the International Court of Justice to challenge the whaling in Southern Oceans which includes Australian waters. On 31st March, 2014 the IJC made published its findings, making it clear that the Japanese whaling industry is illegal. A simple decision that Japan has failed to meet three binding decisions of the IWC and should revoke any permits for its ‘scientific whaling’ in the Antarctic.

FROM THE HAGUE Vassili Papastavrou, a British consultant for the International Fund for Animal Welfare, sent this report: “Today, the judgment is clearly very uncomfortable for Japan but it also presents a huge opportunity. It is time for Japan to re-cast its research on whales in the Southern Ocean through non-lethal means. We need to see the best science Japan has to offer, designed to address the gaps in our knowledge in this remote area. Japan could join the Southern Ocean Research Partnership, and collaborate over studying whales humanely in just the same way that countries do in other disciplines of Antarctic science.”

“It’s said that victory finds a thousand fathers,” he continues. “There are many committed organisations and individuals around the world who helped secure this exciting win for whales. Anyone directly involved will readily acknowledge the work of the global whale team of the International Fund for Animal Welfare. This day would not have been achieved without our decade of committed effort, and none of it would have been possible without you.”

WHALERS TARGETED THE BIGGEST WHALES including blue and fin whales. Sperm whales, especially the males, hold a vast store of oil in their heads and 1 million whales were harvested for this reason. Humpback and right whales, so named because they were the right whales to hunt, were also heavily targeted partly because they moved slower. As pressure grew to avoid these species in the last few decades the less significant Minke whales have been heavily targeted with very little data on their population. Sei, Brydes and beaked whales have been taken by many whaling industries and their records covered up. Genetic fingerprinting of meat in markets and restaurants proved they were being hunted too.

WHALE POPULATIONS ARE NOW ON THE UP, thanks to decades of political negotiations and generating whale sanctuaries. As long as their food supply (krill, small fish and squid) are not fished out, which is a genuine risk in some areas, the populations will hopefully continue to grow.   Scientists are creating ingenious ways to study the whales. One vessel, Song of the Whale, can sail silently from pole to pole listening to the oceans, with computers detecting species and positions of whales. On deck they have photographers and remote controlled helicopters, which fly through the whale blow and collect tissue from their breath, for genetic studies.

IFAW can be found at www.ifaw.org

Tom Walmsley was an expedition leader and cameraman across the world’s major oceans, focusing on whales, dolphins and sharks for a decade.  He then built up a photo agency on marine and environmental themes before switching recently to work in the educational sector.