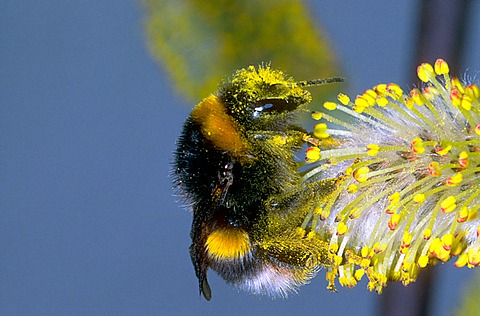 Did you know that one in three mouthfuls of our food depends on bugs? Strawberries, coffee, chocolate and apples, to name just a few, would not exist if they had not been pollinated by these important creatures. Bugs are ‘invertebrates’, which means they have no backbone. There are 40,000 species in Britain and globally they make up the majority of animal life.

Many bugs help break down and recycle our waste, help to clean our fresh water and keep our soil healthy. Bugs are also an important food for wild animals and birds that we cherish such as songbirds, badgers, frogs, otters and freshwater fish. However some of most important bugs to humans are flying insects, like bees, which pollinate wild flowers and crops. There are hundreds of kinds of bees in Britain alone including the domestic honeybee and dozens of bumblebees.

Pollinators are critical for the productivity of many plants. The insects feed on the nectar and pollen produced by the pans. This results in the accidental transfer of pollen, mainly on their legs and heads, between plants leading to fertilisation and the production of seeds. Nearly all wild flowers and commercial EU crops rely on insect pollination.

However bugs, in general, are in decline due extreme weather, pesticides used in our gardens and on farms around the world and loss of the habitats that they live in. Some British bumblebees are now extinct, a third of bees and wasps are under threat and the majority of butterflies have declined significantly. Over 97% of wild flower meadows have been lost since 1930s, often to be replaced by building developments or crops which form a low quality habitat, or mono-culture. Many governments and organisation recognise these changes and have agreed that there is an urgent need to understand and support insect pollinators.

Local councils in the UK plant more trees than they used too but they need more information on appropriate kinds of trees, to avoid stealing the resources required by wildflowers growing in the same spot. Roadside verges are often where traditional land management meets the new demand for wildlife habitats. Once established the wildlife habitats often require less management as the land use is more natural and therefore self regulating.

Urban environments are growing across the UK, and flower-rich oases in otherwise uninviting city habitats support large numbers of pollinators. It has been shown that a matrix of flower rich areas, such as gardens and verges, can be as valuable as one large area for pollinators, as they move around on the wing. Many urban bee keepers are more successful on their roof tops than those in the surrounding countryside. So no matter where you live, you can help save bugs and keep them doing what they do best. See how in the links below…

Urban Pollinators Project: How to create your own wildflower meadow

BugLife: Saving the small things that run the planet

BeesBugsButterfliesEnvironmentInsectsMeadowPollinatorsThreatened species
error: All Images and Video is copyrighted and available to license from www.robertharding.com