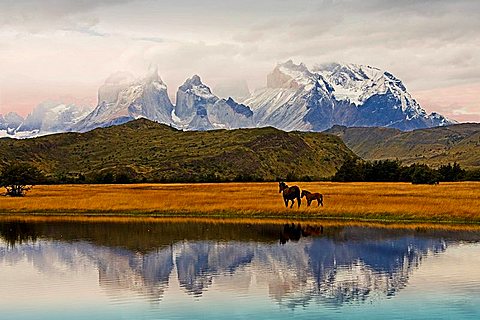 One of South America’s most epic and arresting landscapes, the Torres del Paine National Park is well worth a long journey into the wilderness of Chilean Patagonia. Unbelievable 360° mountain panoramas, glaciers, turquoise lakes and thundering waterfalls – as well as the beguiling towers of granite that give the park its name – await those who visit this UNESCO Biosphere Reserve. This is nature at its most spectacular. Hiking the ‘W’ circuit, which traverses the most iconic sights of the park, takes around five days and accommodation is available in the form of charming mountain refuges, as well as campsites for those who don’t mind braving the notorious southern winds. After hearing friends’ stories of tents collapsing in the night, we opted for the former, where warming suppers are served on long wooden tables, perfect for exchanging notes with new hiking buddies over a Chilean Cabernet Sauvignon. Beginning our journey at the far end of the ‘W’ circuit, we worked our way anti-clockwise towards the towers, taking a catamaran across the vivid turquoise Lake Pehoé to begin our journey. Our first day of walking brought us to the beautiful Grey Glacier, fed by the vast Southern Patagonian Ice Field – also the source of the famous Perito Moreno in neighbouring Argentina, one of the world’s last advancing glaciers – well worth a visit while in the region. A trail of luminous blue icebergs in the milky lake below our path gave clues as to the sight that was to come – a magical, jagged river of ice spilling forth from misty mountains. Some travellers extend their route to the next stop, Campamento Paso, to get closer to the glacier. However, with limited time we opted to head back to the refuge at the foot of Paine Grande, the highest peak in the park, spying Patagonian foxes, a pygmy owl, and the kings of the highlands – condors – soaring high over the mountains. The next day a long – and at times tough – hike saw us cross a thundering river via a hanging wooden bridge, into the Valle Frances or French Valley. We walked the steep path through a forest of lenga trees and past views of the dramatic rock face of Cerro Paine Grande from which thundering avalanches can be seen every few minutes (from a safe distance). The route culminated in a panoramic view of some of the park’s most dramatic mountains, including the Cuernos (Horns) and the Torres (Towers) themselves, a landscape dramatically carved by glacial erosion over tens of thousands of years, through visible layers of granite and dark sedimentary rock. Reaching the cosy wooden refuge of Los Cuernos that evening felt like a just reward for almost ten hours of walking, especially since the wind had stepped up a notch, furiously spraying us with water it had whipped up from the lake, as we passed the pebble beaches at the foot of the slopes.

Having had a great night’s sleep despite a storm howling outside, we woke up the next day to a stunning rainbow, the pay-off for the wet weather, and we headed across the foothills to our final stopping place, Refugio Torre Central. Having been thoroughly weather beaten, especially by the unexpected gust of wind that had us chasing our lunch down a hill, we were happy to arrive at this well designed refuge with stunning views of the Torres (Towers) themselves, getting us excited for the final challenge in our trip. The walk up to the towers is a four hour climb through forest and rocky mountainside paths. The final destination is worth every bit of effort though – the majestic series of monoliths rise up around a base of ice and snow whose meltwater feeds a perfect blue pool of glacial water surrounded by steep slopes of shingle.

Those who are dedicated get up a few hours before dawn to make their way up in the dark – more convenient from the closer Refugio Chileno – to catch the sunrise lighting up the towers in fiery red tones. That’s if you’re lucky enough to get a clear day though – the Patagonian weather is known for its unpredictability and the towers could just as easily be hidden in swirling clouds.

We were blessed with a near cloudless sky, and, although foregoing the early morning light show, the feeling of elation upon reaching the base of the granite towers was unforgettable. Experiencing the extremes of the Patagonian wilderness and its four-seasons-in-a-day climate made us all the more grateful for our arrival at it’s apex. Mother nature takes no prisoners here, but come prepared and you will leave with experiences to savour for a lifetime. January and February are high season and the park is full of visitors from around the world. The best months to visit are in the Patagonian spring in October, November and December or as autumn begins in March and April.

Book the refuges ahead of time as they get busy, however camping is usually a good option if they are booked up. Most campsites have tents to rent if you don’t fancy carrying yours for the 58 kilometres of the ‘W’ route. Look for more details on tours and accommodation at Fantastico Sur and Vertice Patagonia.