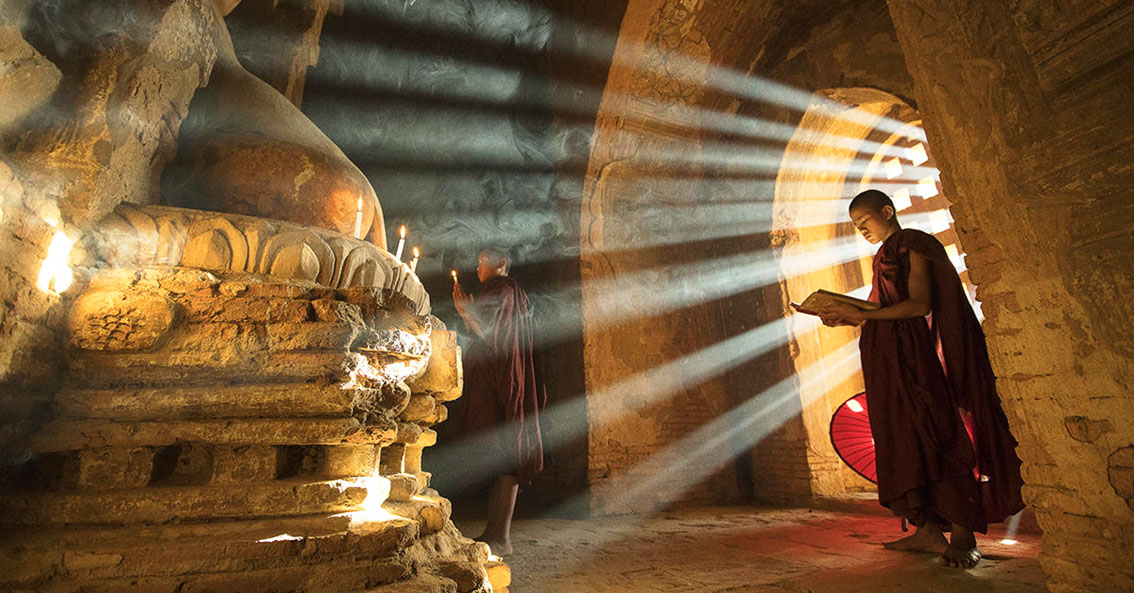 We’re thrilled to announce the winners of our ‘Inspiring Travel’ photography competition in partnership with Photocrowd.

The standard was extremely high, but eventually we chose Chee Keong Lim’s incredible image of two novice Buddhist monks praying in a temple, as our ‘expert’s choice’ winner. This image won the crowd vote too!

The use of light is magical. The first time I saw this image I thought that’s going to be a possible winner. I thought it perfectly represented the brief of Inspiring Travel. Congratulations.”

Robert says: “What an extraordinary image. This photo of the four boys playing in the waterfall is a delight. Capturing the moment of not only the throwing of the water but leaping as well, is I am sure, hard to synchronise and this photographer has done a brilliant job. They are really having fun! Truly inspiring.”

Winning Robert’s third prize is this dramatic image of a buffalo round up in South Dakota, USA, by Tony Bruguiere.

Robert says: “This shot is impressive.

Think David and Goliath. The heavy lumpy dark brown bison overwhelm the cowboy but he is still in control whip flying above his head.

The lightness of the pasture at the bottom helps give scale to the image.”

This atmospheric shot of a cormorant fisherman by Robdigphot wins the fourth ‘expert’s choice’ prize.

Robert says: “What an inspiring travel image. I have seen a lot of cormorant fishermen but usually they are against very dark backgrounds and their features are not prominent. This is the ultimate cormorant fisherman, well lit with a great background to it.”

Chad Briesemeister’s surreal image of ice caves in the Apostle Islands, on the shores of Lake Superior wowed audiences to win second prize in the crowd vote. “There’s over two miles of caves, frozen ice formations, waterfalls and red sandstone cliffs to explore,” Chad said of the extraordinary place he chose to shoot.

Elena Paraskeva won the third prize in the crowd vote with this gorgeous image of Lake Bled, Slovenia, in which a hot air balloon is caught by a ray of orange sunlight.

Lastly, Yevhen Samuchenko (whose creative nickname is Q-lieb-in), won the fourth prize in the crowd vote with this remarkable night shot of the Milky Way seen from a mountain-top.

We want to thank all our winners and everyone that took part in this photo-competition, we were truly inspired by the quality of the photographs and so happy to have been transported by the images to so many amazing places around the world!

See all the winners and runners-up of the competition