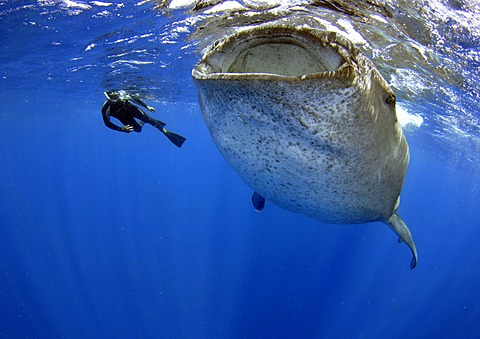 A chat with Andre Seale

Andre Seale’s images show a deep appreciation for the world beneath the ocean. The award-winning photographer started shooting underwater in 1994 while developing a career in marine science. “Photography was a natural consequence of my passionate curiosity for the underwater environment and marine wildlife,” he says. In 1996, while living in Australia, he decided to enter photo competitions and sell some of his shots through agencies. From then on he also began writing articles for photography magazines, and slowly transitioned from, as he puts it, ‘an amateur to a serious amateur to a professional’.

Born in São Paulo, Brazil, and currently resident in Honolulu, Hawaii, Andre has since published his images in hundreds of publications, and now shoots underwater whenever time allows. He describes his style as ‘scientifically creative portraits of marine wildlife and their environment’. He has shot dolphins in the Pacific, whale sharks in the Caribbean and manatees in Florida, as well as a dazzling array of wildlife and locations on dry land. His favourite type of photo to shoot is what he calls the ‘half and half’ image, where both the underwater realm and the world above are visible: “Shallow water, with reef, sand, marine life and the above-water view usually portrays an all inclusive perspective of the environment and its inhabitants,” he says. “By shooting in this style I can convey to people the vision of how beautiful and surprising the world below the surface can be in contrast with the world above it.”

Among his many extraordinary diving experiences, his most fondly remembered was a trip to a pristine coral reef in a remote atoll of the Marshall Islands. “This was a place where no one had ever dived before, and where marine life was so diverse and abundant that my greatest challenge became what to shoot before running out of memory,” he says. His more challenging moments usually come as a result of technical problems with his equipment, such as battery failure, strobe failure or camera flooding, as well as going to sea in strong currents and bad weather. “One experience which I recall vividly,” he says, “..was when I was photographing while sailing in a traditional Marshallese outrigger canoe. Suddenly a bad manoeuvre by one of the crew members forced the canoe to tip over and capsize, dumping all of those on board into open ocean. Fortunately though, my camera was safely enclosed within my underwater housing.” Andre shoots with a Nikon D300, using a Sea & Sea housing and strobes. His favourite pieces of kit change all the time but his current one is his fisheye lens. As well as good equipment, Andre believes that the successful photographer must take with them a generous helping of patience and knowledge when they are shooting. “Good shots only come after thousands of bad ones,” he says. “Especially when shooting wildlife, one needs to understand and appreciate the waiting time, the subject, the behaviour, and other relevant circumstances associated with the shoot,” he explains.

Asked his advice to young, aspiring photographers, he replies: “First, understand the equipment you have and learn the basics of how to take a nice, technically sound shot. Photoshop can clean and improve some things, but the best photos are usually the ones that need little post processing. After that, the more you shoot, the more you learn.”