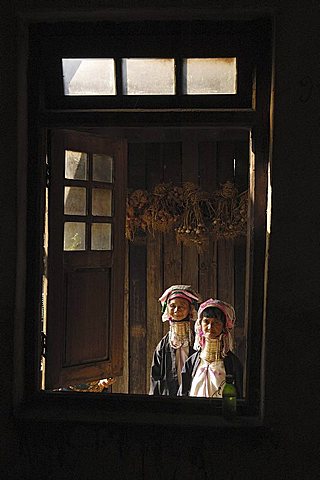 After a travel boycott lasting over ten years was lifted (with Aung San Suu Kyi released from house arrest in 2010) a growing number of tourists are visiting this land of misty stupas (Buddhist monuments), tranquil lakes and friendly locals, hungry for interaction with the outside world. We picked out some of our favourite photos of this stunning country. Some of the 45 Buddhas found at a crescent-shaped colonnade at Umin Thounzeh on Sagaing Hill, near Mandalay (Lee Frost/Robert Harding) Bullock cart on a dusty track among the temples of Bagan with light from the setting sun shining through the dust, Bagan (Lee Frost/Robert Harding) Maria (63 years old) is some of few surviving padaung woman who still wear rings on her neck to elongate it. The tradition of wearing ring is no longer practiced amongst padaung people (Still Pictures/Robert Harding)