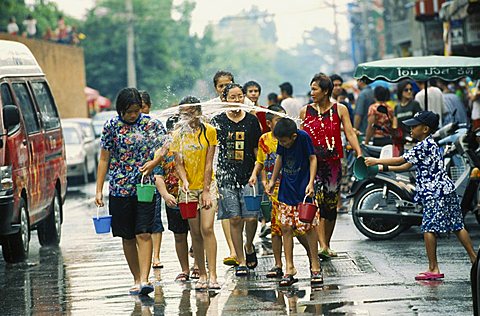 Songkran is Thailand’s New Year’s Day festival, celebrated on the 13th to the 15th April and co-inciding with other New Year’s celebrations across South and Southeast Asia. At the hottest time of year in Thailand, people take great joy in soaking each other with water out on the streets in a kind of cleansing ritual.

Locals celebrate the New Year by throwing water at one another, Chiang Mai (Andrew Taylor/Robert Harding) A girl with a traditional blessing bowl during the festival, Chiang Mai (Andrew Taylor/Robert Harding) Some people cleanse Buddha statues by pouring water over them, believing it will bring good luck and prosperity for the New Year (Authors Image/Robert Harding)