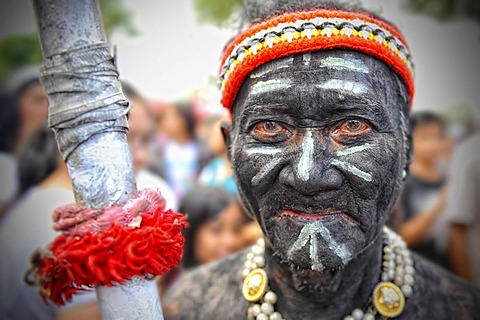 The Ati-Atihan festival is a wild, week-long party in honour of Santo Niño (baby Jesus), that began in the 13th Century, celebrated in mid-January by the inhabitants of the island of Kalibo in the Philippines. Christians and non-Christians alike join a feast and a parade in which some paint their faces black in honour of the islands’ first settlers. The festival was originally pagan, with Spanish missionaries adding the Christian element in colonial times. Parade along White Beach during the Ati-Atihan Festival, an annual feast in honour of the Santo Nino, Philippines (Robert Harding/Stuart Dee) A group of men with body decoration and sunglasses during the Mardi Gras, Ati Atihan, at Kalico on Panay Island (Robert Harding/Alain Evrard)