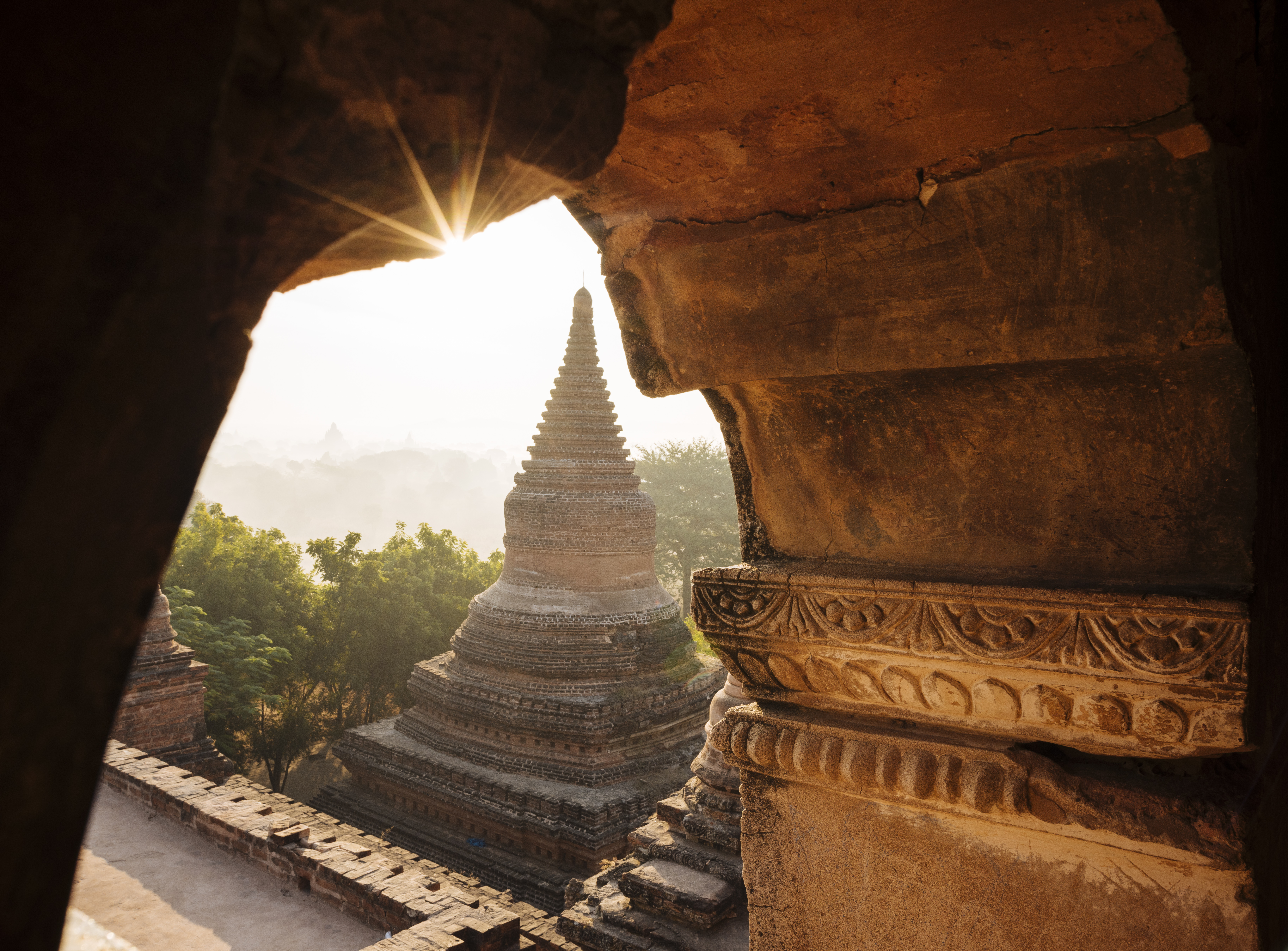 Not all of the 911 precious and iconic treasures promised recognition and protection by UNESCO, (the United Nations Educational, Scientific and Cultural Organization) could be featured in this gallery, but a selection of the most amazing buildings, ruins, and natural wonders are. Here is our pick of print-worthy images, illustrating each stunning location in full detail, depth, and colour.

1. Machu Picchu, Peru Built-in lush, mountainous terrain high above the Urubamba River, Machu Picchu lies in one of the most stunning settings of any archeological site in the world. This ancient city of Incas cascades down steep walls on each side of the mountain, with terraced steps that disappear over cliff edges into the valley below. These incredible ruins have been restored and are well maintained, giving visitors a good indication of what the city might have looked like when it was occupied during the 15th and 16th centuries.

2. Bagan, Myanmar is an ancient city and a UNESCO World Heritage Site in the Mandalay Region of Myanmar. From the 9th to 13th centuries, the city was the capital of the Pagan Kingdom, the first kingdom that unified the regions that would later constitute Myanma.

The setting is breathtaking – a verdant 26 square-mile plain, part-covered in stands of palm and tamarind caught in a bend of the lazy-flowing Irrawaddy (Ayeyarwady) river and framed by the hazy silver-grey of distant mountains.

Rising from the plain’s canopy of green are temples, hundreds of them, beautiful, other-worldly silhouettes that were built by the kings of Bagan between 1057 and 1287 when their kingdom was swept away by earthquakes and Kublai Khan and his invading Mongols. Some 2,230 of the original 4,450 temples survive, a legacy of the Buddhist belief that to build a temple was to earn merit.

Most are superbly preserved or have been restored by Unesco, among others, and many contain frescoes and carvings and statues of Buddha, big and small. Only a handful are regularly visited, and though tourist numbers are increasing and the hawkers are beginning to appear, this is still, by the standards of sites of similar beauty and stature, a gloriously unsullied destination.

3. Cinque Terre is a string of centuries-old seaside villages on the rugged Italian Riviera coastline. In each of the 5 towns, primary colorful houses and vineyards cling to steep terraces, harbors are filled with fishing boats and trattorias turn out seafood specialties along with the Liguria region’s famous sauce, pesto. The Sentiero Azzurro cliffside hiking trail links the villages and offers sweeping sea vistas, providing a stunning backdrop for dreamy sunsets and whimsical sea views as far as the eye can see.

4. With a history spanning 4,500 years Stonehenge has many different meanings to people today. It is a wonder of the world, a spiritual place, and a source of inspiration.  It consists of an outer ring of vertical Sarsen standing stones, each around 13 feet high, seven feet wide, and weighing around 25 tons, topped by connecting horizontal lintel stones. Over the centuries, the stones themselves have developed their own unique personalities and stories: some people see faces in the weathered sarsens, and the birds have favorite nooks to shelter in. There are only six remaining lintels of the outer sarsen circle, which once would have been an unbroken ring of stone.

Located on the Salisbury Plain in Wiltshire, England, two miles west of Amesbury, Stonehenge is the most architecturally sophisticated prehistoric stone circle in the world. Photographed by our professional artists including Gavin Hellier and Tera Images.

Yellowstone features dramatic canyons, alpine rivers, lush forests, hot springs, and gushing geysers, including its most famous, Old Faithful, There are over 10,000 geothermal features, and the smell of sulfur fills your nostrils reminding you just how alive the lanscape is.

6. Taj Mahal, located in India is often described as one of the wonders of the world. The stunning 17th Century white marble was built by Mughal emperor Shah Jahan as a mausoleum for his beloved wife Mumtaz Mahal, who died in childbirth. Considered to be the greatest architectural achievement in the whole range of Indo-Islamic architecture, Its recognised architectonic beauty has a rhythmic combination of solids and voids, concave and convex, and light shadow; such as arches and domes further increases the aesthetic aspect. The colour combination of lush green scape reddish pathway and blue sky over it showcases the monument in ever-changing tints and moods. The relief work in marble and inlay with precious and semi-precious stones make it a monument apart.

The Taj Mahal is the jewel of Muslim art in India and one of the universally admired masterpieces of the world’s heritage.

7. Meteora is a rock formation in central Greece hosting one of the largest and most precipitously built complexes of Eastern Orthodox monasteries, second only to Mount Athos. In a region of almost inaccessible sandstone peaks, monks settled on these ‘columns of the sky from the 11th century onwards. Twenty-four of these monasteries were built, despite incredible difficulties, at the time of the great revival of the eremitic ideal in the 15th century. Their 16th-century frescoes mark a key stage in the development of post-Byzantine painting.

Included in our selection of images, are photographers by Francesco Fanti and Reynold Mainse.

8. Pienza, Val d`Orcia, province of Siena. Located on the crest of a hill overlooking the Val d’Orcia, 53 km south-east of Siena, Pienza was established in the medieval period as Corsignano. The town was renamed and redesigned in the late 15th century by Pope Pius II. Born in this Tuscan town, Enea Silvio Piccolomini became a leading humanist before being elected as Pope in 1458. The boundary of the site, defined by its original wall, includes all the essential elements that contribute to the justification of its Outstanding Universal Value. The ensemble created by Pius II has maintained its structural and visual integrity remaining essentially intact in all its components.

Part of UNESCO’s heritage, this enchanting Renaissance village is surrounded by the Val d’Orcia, one of Tuscany’s most celebrated landscapes.

9. Petra, Jordan or the rose city, was the capital of the Nabatean Kingdom.

Inhabited since prehistoric times, this Nabataean caravan-city, situated between the Red Sea and the Dead Sea, was an important crossroads between Arabia, Egypt and Syria-Phoenicia. Petra is half-built, half-carved into the rock, and is surrounded by mountains riddled with passages and gorges. It is one of the world’s most famous archaeological sites, where ancient Eastern traditions blend with Hellenistic architecture.

The Kathmandu Valley has always been a melting pot of diverse cultures, religions, arts and crafts. The Gopala and Kirat dynasties ruled during the earliest periods, followed by the Licchavi (300-879 AD), who, correspondingly, developed the city with a passion, traditional art, and religious beliefs. The many dynasties that ruled the valley have left a rich legacy in the form of cultural and religious harmony. The various Hindu temples and Buddhist monasteries have been standing next to each other for centuries. Kathmandu enjoys diverse ethnicities, colorful festivals, and countless celebrations.

The famous Pagoda-style architecture is a gift from the Kathmandu Valley to China. Now the valley is home to seven sites which make the valley a UNESCO Cultural World Heritage Site, a reminder of the golden era of Nepali architecture. The bright and bold colours make this a backdrop of dreams, rich and enticing and full of life and energy.

11. The Great Wall of China, A famous series of fortifications that were built across the historical northern borders of ancient Chinese states and Imperial China as protection against various nomadic groups from the Eurasian Steppe. Captured by robertharding photographers such as Bruno Morandi and Alan Copson, showcasing the 13,000 miles of the wall, which took more than two millennia to build. Some 50 percent of the original ancient structure has already disappeared, and perhaps another 30 percent lies crumbling into ruins—even as Chinese and international organizations struggle to preserve what remains of this unique treasure.

There are many ways to visit this spectacular wall. Some visitors aspire to admire the views from popular tourist sections, pose for pictures, walk the wall, and take advantage of amenities from restaurants and shops to cable car rides. Others choose to explore rugged sections of the structure on extended hikes and climbs of unrestored “wild wall” sections, though these can be dangerous and are often located in rural areas well off the typical tourist path. Our photographers have done the hard work for you, all you need to do is choose which picture to purchase.

12. The Great Barrier Reef located in, Australia, finishes up our blog post in the most vibrant and atmospheric way possible.

The GB Reef is the world’s largest coral reef composed of over 2,900 individual reefs and 900 islands stretching for over 2,300 kilometres (1,400 mi) over an area of approximately 344,400 square kilometres (133,000 sq mi). The reef is located in the coral sea, off the coast of Queensland, Australia. Visible from outer space, this reef is the world’s biggest single structure made by living organisms. It also holds great scientific interest as the habitat of species such as the dugong (‘sea cow’) and the large green turtle, which are threatened with extinction.

Here at robertharding, we have pledged our support to the Big Blue Ocean Cleanup and the Hebridean Whale & Dolphin Trust. We must keep oceans clean, safe, and protected for generations to come. So far, over 2 million KG of rubbish has been removed from the oceans.

Through supporting innovative technologies, running free educational workshops, and providing resources for schools around the world, big blue is on a mission to end ocean pollution. The non-profit also sends out free clean-up equipment to anyone who requests it, and this is done on a global scale from their distribution network.

DISCOVER OUR LICENSING OPTIONS
error: All Images and Video is copyrighted and available to license from www.robertharding.com