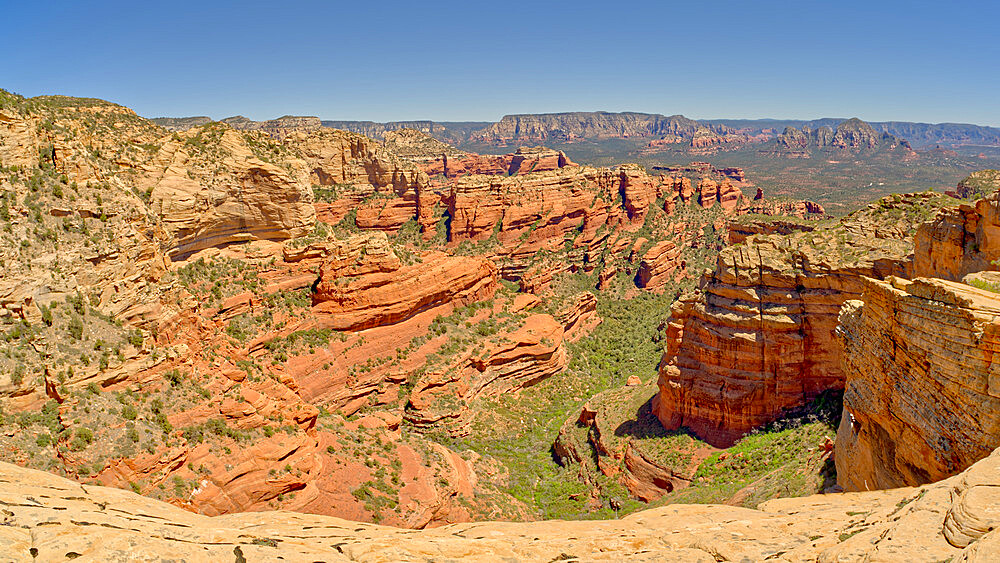 Arizona is one of those few places in the world where a photographer can see a variety of landscapes from the sub-tropical Palm Canyon in the Kofa National Wildlife Refuge to the Martian-like red rock terrain of Sedona. But Arizona is most famous for the Grand Canyon National Park, Vermillion Cliffs National Monument, and Petrified Forest. But what is not as well known to visitors are the dangers of venturing into the wilderness area of this beautiful and unique American State.

When I first arrived here in 1995 I was not aware of the dangers of the Arizona desert. I grew up in Michigan, where the summers are more moderate and the temperatures much cooler. Like most newcomers to Arizona, I did not appreciate the harshness of the desert at first. I rode a bicycle 40 miles in 100F temperatures and it nearly killed me. I have since learned from that experience and have developed a wariness of the deserts of Arizona that most tourists don’t know about or simply don’t believe can affect them. In addition to the hot summers, there are poisonous snakes, spiny cacti, thorny bushes, and even hidden sinkholes to look out for if you’re planning to photograph the wilder areas of Arizona. I could write a book on the dangers of photographing Arizona, but for now, I will focus on my experiences of photographing Petrified Forest, the Grand Canyon, and my other photographic love of chasing the summer monsoon lightning storms.

Petrified Forest’s landscape is among one of the most beautiful of the National Parks with its otherworldly red, blue, and purple bentonite hills. Some parts of this famous National Park resemble another planet. In addition to being one of the most beautiful of the National Parks, it has a treasure trove of Petrified Wood and even fossils of ancient clams and dinosaurs. However, behind this facade are a number of dangers for photographers that aim to explore this vast park. Many of the more interesting parts of the park are far away from the tourist overlooks and off the beaten path. Because of the arid nature of Petrified Forest, you must plan well ahead if you intend to hike more than a couple of miles from the main road. It is also best to hike this park in the winter. When I hiked Petrified Forest for the first time it was in July and I underestimated the amount of water I needed. I was only intending to hike around 8 miles at the time but the heat and dry air got to me very quickly. I used up my water with 3 miles to go and I was starting to suffer the effects of heat exhaustion. I now make sure to take at least a gallon of water with me when I go on photography hikes to Petrified Forest or any other desert for that matter.

At the Grand Canyon, the higher elevation of the rim can give you the illusion of a milder climate, but there too are dangers. Like with Petrified Forest some of the best scenery to photograph at Grand Canyon is away from the tourist overlooks. However, if you hike down from the rim into the canyon the temperatures can soar to as high as 120F at the river bottom during the summer months. There are actually signs on the main trails warning to not try and hike down to the river during the summer months. According to the Park Service, 250 people a year on average have to be rescued due to heat exhaustion. That is why during the summer months I have done my photography hikes to Grand Canyon primarily on the rim. But even these hikes are not totally safe. For instance, on one hike I did out to a rock formation called the Sinking Ship the ground gave way under my feet and I slid 15 feet down the slope of the formation. Fortunately, I had the foresight to wear heavy rubber boots and leather work gloves. I was able to stop my fall by digging my heels into the dirt and grabbing ahold of nearby bushes. I finally came to a stop about 10 feet from the cliff’s edge. Below was a 1000-foot sheer drop-off into the canyon. If I had worn regular shoes I might have kept sliding until I went off into the canyon, and if I had not worn the leather gloves my hands would have gotten torn up on the thorny bushes I grabbed onto. So, as a warning to all of you photography novices planning to take on places like the Grand Canyon, make sure to carry plenty of water, and wear the proper footwear with heavy-duty gloves, just in case you need to get that perfect photo while on a ledge.

Besides the danger of collapsing ground and falling off cliffs at Grand Canyon, there is also the danger of unpredictable weather. During one of my last visits to the Grand Canyon, an unexpected monsoon storm rolled into the area while I was several miles from my vehicle between Buggeln Hill and Coronado Butte. Since I love to photograph monsoon lightning I decided to take advantage and try to get as many shots of the approaching storm as I could. The link below goes to one of the lightning photos I managed to capture from that hike.

While I was capturing this lightning strike I was not aware that the storm was heading right for my location. When I realised that the lightning was getting uncomfortably close I packed up my camera equipment and started back to my vehicle. However, the storm was approaching faster than I could hike. With still over a half-mile to go before reaching the safety of my vehicle the rain came pouring down. Fortunately, my backpack was rain resistant so my camera equipment did not get wet, but I was getting soaked. But what was most frightening was that the lightning was now coming down around me. The bolts were striking within a few hundred feet of where I was standing. Every time I saw a flash the bang of thunder came a fraction of a second later. So close that I could smell ozone and burning wood in the air. With each strike, I could feel a kind of static zap in my body. Since there was nothing I could do about it I simply kept marching back to my vehicle. I felt it was best to keep moving rather than stay put among the trees and make myself a target. Strangely enough, however, when I finally got back to my vehicle and calmed down I found the experience exhilarating. During the almost 20 years I have been photographing storms I was always able to do it at a distance. This time, however, was the first time I actually got caught under a storm in a forest.

Some people would probably say that I’m crazy for doing this type of work, but at least I am doing what I love, even if there is a chance I might get killed. I would rather take that chance and do what I love rather than sit in an office typing at a keyboard all day.

Have you ever found a picture that takes your breath away? It visually captivates that nostalgic, engaging, and exciting feeling that brings to life an adventure you can’t wait to explore. This is what founded the global leading travel & nature photography agency – robertharding.com

Founded by professional photographer Robert Harding in 1972, his passion for travel & use of nature & culture as his canvas, lead to the representation of hundreds of independent artists creating a collection of exceptional footage & stock photography. The very finest in visual storytelling.

Is licensing photography a part of your working day? let us lighten the load with custom rates, free research, photo shout-outs to our network of photographers for those tricky to find images and much more.