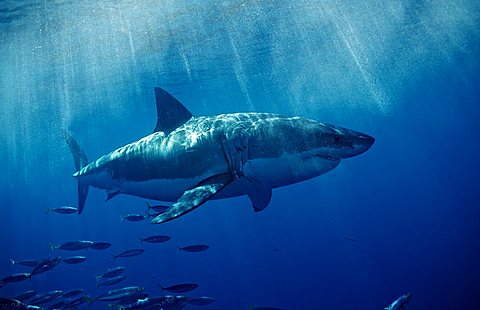 A chat with Reinhard Dirscherl

German photographer Reinhard Dirscherl specialises in spectacular underwater photography. His oceanic subjects have included magnificent giant turtles off the coast of Hawaii, majestic great whites in California, fluorescent glowing coral in Indonesia and shoals of Atlantic sailfish hunting off the Yucatan coast in Mexico, one photo of which won a prize at the prestigious World Press Photo contest in 2011. Reinhard was introduced to scuba diving in 1989, after originally studying engineering. “In 1990 I travelled to Thailand to scuba dive. There I rented an underwater camera and shot my first underwater images,” he recalls. He was disappointed with the result, which, by today’s standards, he describes as ‘horrible’. But determined to improve, he bought an underwater camera and continued, diving in lakes across Germany and Austria. Since then Reinhard has photographed oceans, reefs and marine reserves across the world – from the Indian Ocean to the Galapagos Islands. As we speak he is about to fly to Dominica to shoot families of sperm whales. “In the past my favourite dive sites were tropical coral reefs,” he says. “But now I prefer the bigger animals like whales and sharks.” Asked if he has ever felt afraid when confronting these beasts, he says no. He considers that the diver’s own alertness – especially with regard to currents and water depth – is a far greater risk factor than the animals themselves. His most terrifying experience came not at the hands of sharks, but when a diving boat capsized a few years ago, leaving him to swim for nine hours to the coast of Papua New Guinea with a dislocated shoulder.

However, even this harrowing experience did not deter him from his incredible passion and fascination for the underwater world. He estimates that he spends 150 days per year in the ocean, and sees it as his ‘second home’. Asked how he gets such great images, Reinhard replies: “Every nature photographer has to understand the behaviour of the animals. Otherwise he can´t shoot images of them. The animals decide if the photographer gets his perfect shot or not.”

Reinhard uses Canon EOS-1Ds Mark III cameras and Canon lenses in Seacam underwater housings, and underwater strobes. “But I don’t think the camera system is important,” he says. “The photographer produces the images in his brain. The cameras are simply his tools.” Looking to the future, Reinhard is all too aware that pollution, climate change, overfishing and inadequate protection threaten the world’s oceans. He hopes his photography might encourage an appreciation of how much we have to lose. “I will show people the beauty of nature and marine life,” he says. “And maybe this will be a small contribution to saving nature and the seas.”

2 thoughts on “‘The ocean is my second home’”